Although Pedro Figari is internationally known as a “painter of Candombes”, in fact he worked in many other themes, such as countryside scenes, Creole dances, circus characters, bullfights and Venetian landscapes, just to mention but a few. But as it happens nobody before him, and perhaps nobody after him, was capable of conveying with convincing brush strokes, the movement of the bodies, the colourful garments, the general gaiety and the profound wisdom nurturing these celebrations. Because Candombe is festive music and dance, but also sacred rite and liberation.

“Candombe” was probably painted in the 1930s, when Figari had become a master in these motifs, with full control of his expressive resources. The scene is composed with a scenographic criterion, as if all the dancers were looking to the front, towards the viewers that are observing them passively from the seats of a theatre. However, “they” are immersed in the excitement: in the centre one takes his hand to his mouth, as to make himself be heard over the beating of the drums. At his side, we see the King of the ceremony, highlighted by a red band that crosses his chest and the high hat. The King, sitting comfortably, cannot hide a wide smile and a gesture of approval with open arms. Further on, we see the Queen, with a bright and colourful headdress, and between both the little figures of the three magi who mark the height of the celebration: it is January the 6th. Hence all the characters are dressed in luxurious garments, the male characters with frock coats and top hats, the women with undulating dresses and bulky skirts. Dimensions of the work: 62 x 82 cm. Framed work: 78.5 x 90 cm 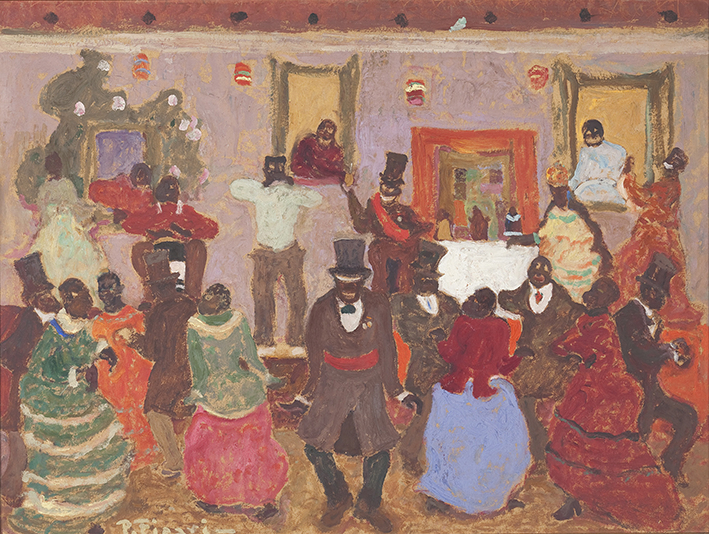 Good condition. It is stored in vertical racks under a controlled environment.

Pictorial work from the collection of the Figari Museum. It is part of the rotation of works in the exhibit halls in order to allow access by the public.